When you are trying to troubleshoot an instrumentation system (whether it is in examining a PhD thesis or facing a major industrial crisis) there are, self-evidently, two vital areas you need to address:

The central problem with data acquisition, now that data conversion is largely standardised through advances in electronics, is the housing and siting of sensors. Sometimes the problems are glaring, such as caking with mud or salt, but often they are more subtle and veiled. Particularly difficult are cases where instrumentation interacts with nearby systems (see appendix below for an example where an expensive court case was averted).

Data handling is an even greater problem, especially when “intuitive” or obscurely argued methods are implemented. Even if we discount the possibility of deliberate fraud, the power of the human subconscious to influence outcomes is a known but difficult to quantify hazard, especially in computer programs.

In considering data handling for climate monitoring in these terms, we now have the advantage of new information on siting and a description, though not a perspicuous one, of alterations made to original data.

We have long known that there have been examples of badly sited monitoring stations. The late John Daly showed seven years ago an example of bad siting, while, incidentally, raising the question of whether the surface record was as reliable as we were led to believe and proposing improvements of methodology. Daly’s analysis has not only stood the test of time, but has been vindicated by recent developments. The satellite record continues to show little or no change while the surface record shows what is alleged to be a continued rising trend.

Here is the satellite record:

While here is the surface record:

In any other field (with the possible exception of epidemiology) such a discrepancy would result in an international conference to hammer out which version was correct. When you take into account that the difference is responsible for a multi-billion dollar international industry and a world-wide raft of draconian, liberty-crushing legislation, the silence is leaden.

The new development on the siting problem is that a systematic investigation has begun, involving the gathering of photographic evidence. The results so far are disturbing, even shocking.

This for example is a monitoring station at Wickenburg Arizona: 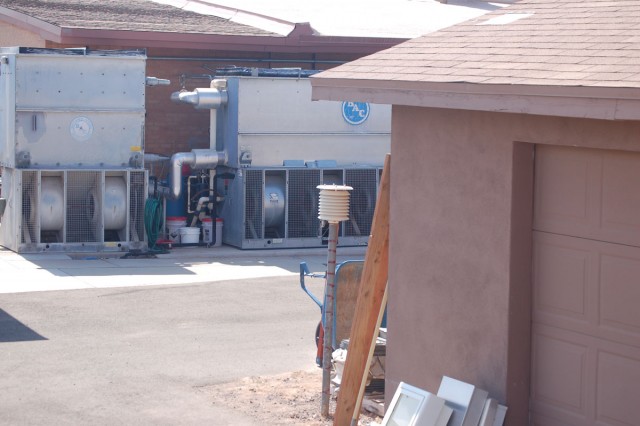 The objects in the background are large air-conditioning units.

This is what John Daly wrote seven years ago about surface stations:

The only way surface data can be used with any confidence is to exclude all town/city and airport data - no exceptions. Only rural sites should be used, and by `rural’ is meant strictly `greenfields’ sites where there is no urbanisation of any kind near the instrument. Even when greenfields stations are used, those which are technically supervised (eg. managed by scientists, marine authorities, the military etc.) should be treated with greater credibility than those from sheep stations, post offices and remote motels.

This total and obvious common sense has been completely ignored by the Climate Change Establishment. An industry turning over billions of dollars does nothing to ensure the integrity of the data on which it is based. The fee Al Gore gets for one hair-raising lecture alone would more than pay the annual salary of a warden to look after several such stations. “Insouciance” is an inadequate word for what appears to be a calculated dereliction. You might even suspect that they do not wish to know the truth.

So, that is the data acquisition – what about the processing? We can get a description of that from the horse’s mouth.

Mental warning lights flicker when the phrase “high-quality” appears in each of the first two sentences. It is redolent of the salesman’s patter – never mind the quality, feel the width. There are other warning phrases such as “several adjustments” or “empirical model”, enough to raise the hackles of an experienced PhD examiner. But any such reservations pale into insignificance compared with the effect of the overall adjustment.

Not only is the total adjustment sufficient to account for a large proportion of the claimed temperature rise, but as a graph against time it is just the right shape to give support to the claim that the rise is post-industrial. Such a coincidence is more than enough to make an old-fashioned scientist feel, to say the least, uncomfortable

Global warming is a new phenomenon in human affairs. Not only is it now a major religion, but it has an associated industrial complex of a wealth sufficient to give it unheard of political power throughout the world. It presides over a virtual monopoly of research funding. The tiny band of critics have to work without resources and under a continual barrage of abuse. Experience suggests that those collectors of photographs had better watch out for dirty tricks, now that they are making an impact.

Clearly, global warming is anthropogenic (man-made). It exists mainly in the human mind and is manufactured from two sources – careless data acquisition and dubious data processing.

Example of a case of a system interaction problem (from Sorry, wrong number!)

I was consulted by a company who were having difficulties with their customers over an instrument within their equipment that was giving seriously faulty readings. The company was in legal dispute with the supplier of the instruments, who claimed that, when they were returned, they proved to be in perfect working order. I visited the client with two colleagues from my consultancy practice. When we opened the door of the cabinet the explanation was glaring. The instrument, which was not built to high standards of electromagnetic screening, shared its housing with large switchgear designed to control heavy machinery. Whenever a switch operated it induced large pulses of current within the instrument, causing it to misread. I advised that both parties were at fault in failing to communicate their specifications correctly and the case stayed out of court.