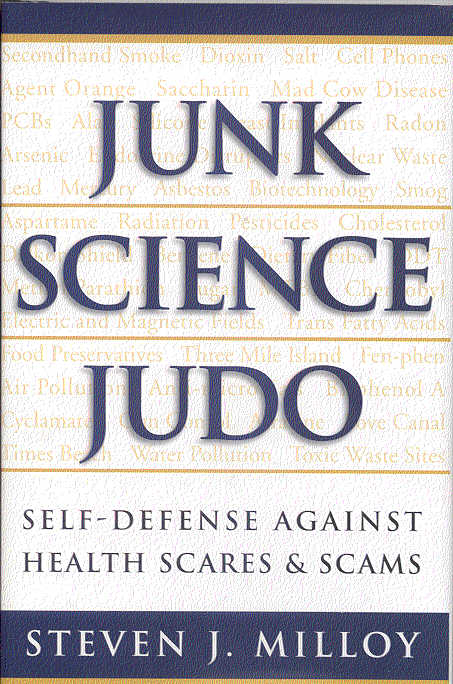 A new book by the doyen of anti-junk writers is always an important event. The founder of junkscience.com, which is the major resource for anyone interested in observing the scale of abuse of science that goes on in the world today, as usual adopts a style which will be found approachable even by the most mathematically phobic reader. All the major villains are there (Epidemiologists, EPA, CDC, Harvard Nurses Health Study, Precautionary Principle pushers, purveyors of marginal statistics etc.) and are taken apart with practised ease. The format adopted is twelve lessons designed to equip the lay reader with the means to combat the overweening dominance of debauched science in the media and politics of today.

One of the techniques used by junksters to confuse the public and lazy journalists is the obscurantism of technical jargon. Milloy adopts an approach based on simple arithmetic examples to undo the knots of relative risk, confidence intervals, confounding factors and the rest of the paraphernalia. The layout makes the text eminently readable, even for those suffering from the modern malaise of reduced attention span. It is broken up by the interpolation of sub-headings in the form of simple rules and myths that succinctly summarise the whole midden that is modern science reporting.

The tragedy of such an exercise, and for all of us who try to draw attention to the abuses, is that it will be largely preaching to the converted. Most people, even among the informed and intelligent, simply don’t want to know and the “science” journalists are on to too good a thing, with sensational copy landing daily and effortlessly in their in trays. The bureaucrats are equally comfortable, as are their protégés in the academic community. Above all, the so-called NGOs, have the ammunition to keep manufacturing their staple product, which is anxiety, and thus keep their coffers full.

A must read for anyone interested in preserving the integrity of science.