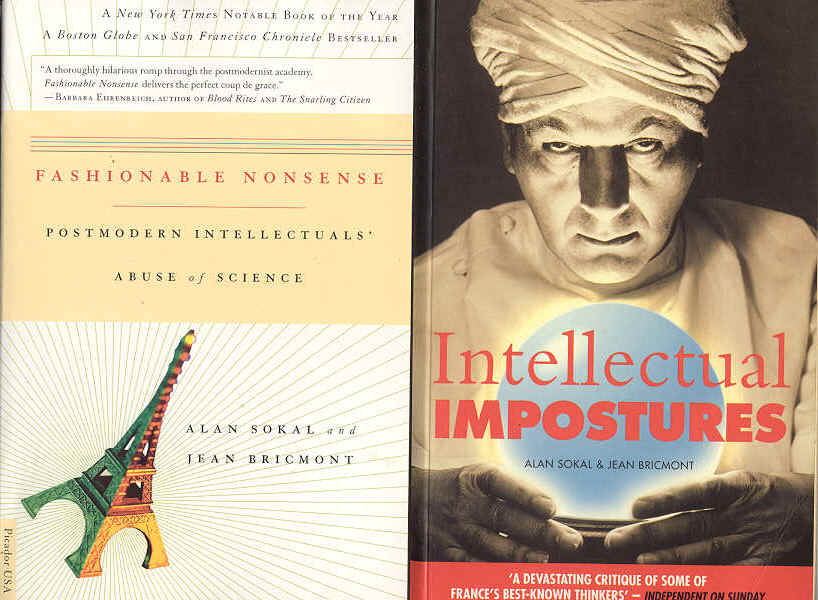 First a warning! When Amazon recommended two books by these authors, I ordered both of them. It was only when I was two or three pages into the second that I realised it was the same text as the first. They are both the authors’ translation of their French text Impostures Intellectuelles.

The starting point is the delicious hoax perpetrated by Alan Sokal on the intellectual pseuds of the post-modern movement. This was a parody Transgressing the boundaries: towards a transformative hermeneutics of quantum gravity, which was accepted for publication by the American cultural studies journal Social Text and is included as an appendix. Furthermore, it was published in a special issue of the said journal to combat the criticism of the post-modern movement levelled by distinguished scientists such as Gross and Levitt. The delight of the hoax is heightened by the fact that from the first page it is self evident to anyone with a modicum of scientific knowledge.

Against this background, the authors delve into the writings of some of the most fashionable French intellectuals and expose them for the preposterous, pretentious tripe that they are. The results are hilarious, not least for the quotations of the comments of members of the coterie on each other’s work, in which they typically praise the clarity of thought. One by one, these philosophers are taken apart with the aid of quotations from their own work. Read and enjoy!