Damned lies and statistics: untangling numbers from the media, politicians and activists

Bishop: How is your egg?
Curate: In parts quite excellent.
Punch cartoon 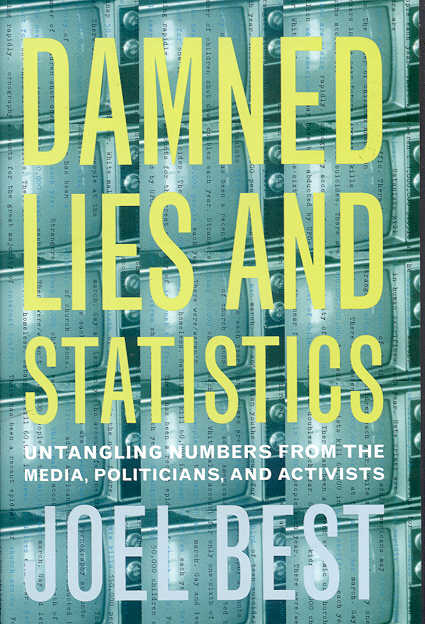 An excellent read and well worth the purchase, but do not expect it to be a comprehensive treatment of wrong numbers. It is all about the statistics of sociology and the sociology of statistics. You won’t find here, for example, the promotion of health scares by lax standards of significance or the propping up of myths such as global warming by selective and opportunistic number spotting.

The argument is almost wholly verbal, which limits the scope, but makes it more widely accessible. There is consequently very little mathematical reasoning, a wise choice for an author who wants to sell his book, as those of us who are less sagacious know only too well.

The starting point is the “worst social statistic ever”, quoted by a prospective PhD student from a professional journal: “Every year since 1950, the number of American children gunned down has doubled.”  Anyone trained in mathematics will recognise the definition of the exponential function and would be unsurprised that the consequence would be to produce a number larger than the whole world population by the 1980s. The whole farrago was caused by the syntactical and logical error of displacing two words in the original statement “The number of American children killed each year by guns has doubled since 1950”. This is roughly in line with the increase in population and therefore totally unsurprising. A remarkable testament to the power of words!

There are many felicitous turns of phrase, some of them quite delightful. The concept of the “mutant statistic”, for example, is so apt. One case is the figure reported for 150,000 American women dying of anorexia every year. It started out as a simple observation that there was this number of sufferers from this condition. At some stage this became transmogrified into a number of deaths and it stayed that way thereafter.

Then there are the Stat Wars. Activists (a polite sociological term for Single Issue Fanatics) produce startling figures, which are somewhat discrepant in comparison with the official ones, such as 50,000 kidnapped children that shrink to 70 on detailed investigation. There are many other examples and the astonishing thing is the longevity of such mutant numbers in the face of continual rebuttals.

On the adverse side, for a book that rightly condemns imprecise language, there are passages that caused the pedantic hackles to rise for at least this reviewer; for example “The difference between a million and a billion is the difference between one dollar and a thousand dollars.” For the numerate, difference has a precise meaning and it is not ratio.

The book makes an effort to skirt the excesses of political correctness, but it does not entirely succeed. A way of determining the degree of PC bias in a publication such as this is to apply the tobacco test. If it can meet with the enormities of  both the tobacco industry and its opponents, yet treat those two impostors just the same, then it is free from prejudice. This book has three mentions of tobacco, two of which are indexed. The first is a passing mention without comment of the comprehensively demolished 400,000 US tobacco deaths per year. The second refers to the “notorious” challenging by the tobacco industry over decades of every research finding that smoking is harmful. The third is a whole paragraph that is a purely verbal attack (without statistics) of the misdemeanors of that industry. All true, but there is no mention, for example,  of the most egregious multiple fraud in the history of applied statistics that is the EPA “study” on passive smoking. Two equally villainous adversaries, but only one is pilloried. That is PC.