Is there such a thing as average global temperature?

In order to understand temperature we have to know something about the nature of physical systems.

In general physical variables come in pairs. These may be called potential and flux variables, or across and through variables. A familiar example is in the flow of water, where the across variable is pressure head and the through variable is the rate of flow. A complication is that sometimes the variables appear in forms integrated or differentiated with respect to time, which leads to a further division into extensive and intensive forms. Some familiar examples are shown in the following table, where the dot notation is used to indicate rate of change with time. 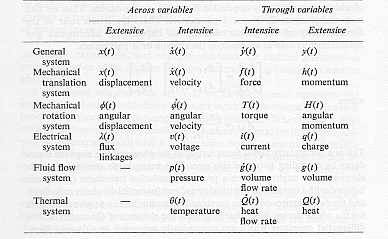 From Laboratory online computing by Brignell and Rhodes, 1975.

It is easy to become confused about which is which, but the important rule is that the across variables obey a law that they sum to zero round a loop, while the through variables sum to zero at a point. In electrical theory these are known as Kirchhoff’s laws. The across and through pairs are usually related to each other by simple laws, such as Ohm’s law. When across variables are scalar (i.e. they do not have direction like velocity) they can be plotted as contours on a surface, as heights are on a map. Thus we have isobars and isotherms.

It might be thought that the quantity of heat (in joules) or the rate of heat transfer (in watts) might be easy to measure, after all heat is subject to the law of conservation of energy. However, they are not. Even in the laboratory, experiments based on heat balances are notoriously difficult, as for example in the cold fusion controversy. Bits of heat tend to get lost. As the author’s old physics master used to say – the trouble with a heat balance is that it doesn’t. It is even more difficult in the atmosphere, where each gas in the mixture has a specific heat that is different at constant pressure or constant volume. The important water component has latent heats of melting and vaporisation, potential energies that are not available for changing the temperature. Temperature, on the other hand, is relatively easy to measure. Because of the universality of the Boltzmann factor almost everything depends on temperature and you can make a thermometer of almost anything.

As we see from the table, temperature is an across or potential variable and its companion, heat flow rate, is the through variable. The physical basis of temperature is that, to take the case of a simple gas, it represents the average kinetic energy of the molecules as they are bounced about by thermal agitation. From the kinetic theory of gases we know that this average kinetic energy per molecule can be expresses as 3kT/2, where k is Boltzmann’s constant and T is temperature expressed on the Kelvin scale. The value of k is 1.38054*10-23 J/K. At zero Kelvin there is no movement and nothing happens. At room temperature (say 290 K) the average kinetic energy is one fortieth of an electron volt. Naturally the molecules have different energies, which are distributed according to the Maxwell distribution.

If heat flow were determined purely by conduction it would all be a relatively simple matter. For a given configuration it could be exactly modelled by, say, an electrical system, because it obeys the same equation (Laplace). Unfortunately, and particularly in weather systems, heat flow is dominated by convection, the physical movement of the medium. On a global scale there are other factors. These include periodic changes in solar heating due to solar activity variations, the seasonal changes due to the inclination of the axis of the earth to its orbit and the Coriolis effect due to the rotation of the earth, together with medium term cyclic instabilities such as El Niño and the North Atlantic Oscillation. Hence there is no equivalent of Ohm’s law and the weather is very complicated; so, despite relying of some of the most powerful computers on Earth, the weather forecasts in our morning newspapers are somewhat less than reliable.

The global thermal system, however, is not well behaved. It is non-linear. It is highly non-stationary, as is shown by the occurrence of ice ages. In more recent history, we have had the Mediaeval Warm Period and the Little Ice Age, which are well attested by art, history, literature, archaeology, dendrology, entomology etc. Another complication is the activities of mankind. While they are insufficient to disturb the Greenhouse Effect, which provides the warmth for life to exist on Earth, man-made Urban Heat Islands interfere with the sampling process. It is an unfortunate fact, for example, that the longest continuous temperature record, Central England, is situated in one of the most populous and industrialised places on Earth.

The global average temperature exists as a theoretical concept. If we were able to place a large number of sensors around the world at regular spacings, we would be able to establish a meaningful estimate of the instantaneous average, which could then in turn be averaged over a year to produce a number that is a reasonable representation of the thermal state of the surface of the planet. Unfortunately, such a ground station network does not exist. Not only are the existing sensors poorly distributed, many are placed in thermally atypical sites such as cities and airports, others are in primitive rural areas where they are poorly maintained. Ironically though, it is over the oceans that the most discrepant surface measurements occur. Thus surface weather stations provide a very poor basis for determining average global temperature.

Fortunately there is an alternative, which is satellite surveillance. Microwave radiation from oxygen in the atmosphere is temperature dependent and therefore provides a convenient remote thermometer. Because the satellite orbit is continuously scanning the Earth’s surface like a television raster, it is equivalent to a very large number of well-distributed thermometers. As a result it produces a credible estimate of a global average temperature. The results cross calibrate well with data collected by balloons.

Less fortunately, the satellite record is relatively short, as the technology has not been around for very long. It shows a slight cooling trend, but all finite data sets show trends that are not necessarily properties of the parent distribution. All the satellite data tell us at the moment is that there are no dramatic changes of temperature occurring.

Footnote (Jan 06): According to revisionists, the satellite data now show a slight warming trend. This does not affect the argument, besides the fact that apparent trends in random data are never zero, variables in the real physical world are never constant.

El Niño gives us grounds seriously to doubt that the average global surface temperature is a sound measure of whether the Earth is either warming or cooling. El Niño is purely a phenomenon of convection. It contains no heat sources and just rearranges the heat there is (mainly in the oceans). Yet El Niño is widely credited with producing a “record” surface temperature in 1998. Consequently it influences the slope of trend lines, particularly those over relatively short periods and terminating around that time. Such were widely used to justify the claim that the planet is warming.

It is easy to see how simply rearranging the thermal furniture could affect surface station estimates of the average global temperature, since the measuring points are very unevenly distributed, but the same effect is also apparent in satellite data. Obviously there is no problem with the claim that El Niño causes local warming in the tropical Pacific, but it is quite fallacious to claim that El Niño warmed the whole planet, unless a new as yet unidentified source of heat can be associated with it.

This raises the question as to whether there are other less dramatic oscillations that give rise to spurious indications of planetary warming (or indeed cooling).