The man who knows 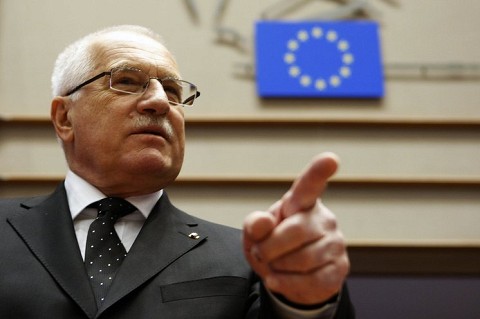 There is one statesman who has the intellect to understand what it going on in Europe and the courage to speak out about it, Václav Klaus. Unfortunately no one in the fantasy world of European politics is listening.

Too bloody late, as usual, and by a decade

Back in July 2002 Number Watch carried the headline Dangerous and destructive nonsense. That was about the HRT scare. A decade later, after much suffering caused to millions of women, doubts have been raised by medics, including two who were involved in the original trial. The whole thing was a farrago of nonsense, with ludicrous relative risks and the scandalous premature termination of the supposedly blind trial. It was just another illustration of the law of beneficial developments.

Our number of the month for April 2004 was 850,000, being the number of women who had by then abandoned HRT. Of course there was a lovely pay off for unscrupulous American lawyers.

If those “researchers” had been working in the field of finance they would have gone to jail, which is the right place for them.

The Daily Telegraph of modern times carries so many items of junk epidemiology and cod psychology that it would be tedious to try to comment on them. This one, however, must be a candidate the No Bell prize for insignificance.

The noble art of misdirection

Misdirection is the fundamental component of the art of the stage illusionist, but it is also essential to the equipment of the skilful politician (and in modern times increasingly so). When the Daily Telegraph second leader was given the title No sense of proportion, it was pointing to this greater truth.

The Euro is not suffering a series of crises. From the moment of its launch in 1999, it has been haunted by a steady divergence of the economies that subscribe to it. The successive crises occur in the fields of politics and the markets, human activities controlled by emotion rather than logic. It was predictable and widely predicted that the concept of One Size Fits All (OSFA) would prove to be fatally flawed. As the divergence progressed it was amplified by positive feedback mechanisms: for example, as some economies thrived because they had the advantage of an undervalued currency (much as China has benefited), so others found that they were handicapped by an overvalued currency, though it was the same currency. Thus resources were gradually diverted from the weak to the strong and on the graph of economic health the individual national lines fanned out wider and wider. Borrowing is easier with an overvalued currency, so the tendency to take on debt as a means of “keeping up with the Joneses” was irresistible to naïve politicians and individuals, piling feedback upon feedback. The continual stream of diktats, of varying degrees of irrationality, pouring out of the Brussels Kremlin, exacerbated the deterioration, while political straitjackets, such as the Common Agricultural Policy, handicapped the weak more than they did the strong.

The concerted purpose of the European political classes is to divert attention away from the fundamental flaw (OSFA) and towards various side shows. The creation of the EU itself was largely based on illusory practice. Many of us oldies voted for the EEC, which was simply and beneficially a common market, and even campaigned enthusiastically for it.

In a piece on the related art of obfuscation, nine years ago, we remarked that OSFA was then already a cliché. What initiated that discussion was a highly obscurantist document issued to justify the common sense decision not to join the euro, one of the  rare Gordon Brown decisions for which we have reason to be grateful. As usual, those comments elicited outraged attacks from the believers and one of the more polite ones led to an interesting debate.

A decade later we have a new type of politics that reveals the influence of Basil Fawlty.  There seems to be an unspoken injunction on all parties of the form “Don’t mention the X”, where X can be anything from our present topic, EU, to grammar schools. Ministers are more willing to accept the opprobrium of implementing irrelevant or downright destructive legislation than to admit that they are obliged to obey orders from the Brussels bureaucrats. There are coded phrases in continual use: for example not available to gardeners translates as banned by the EU (and for no particular reason). European chemophobia has turned British gardens and allotments into reservoirs of pests and diseases. Even the humble Busy Lizzie has been threatened with wipe-out and there is no defence available, while much of the grow your own vegetable movement is in despair. The cause of much angst in the Westminster village is the poor rate of social mobility in the UK compared with other countries. It is readily admitted that in the 1950s we had a very high rate, but what must not be mentioned is that it was brought to an end by the Maoist demolition of the grammar schools. Why a government led by an alleged Conservative should be so shy is a mystery (unless it is their own guilt about wrecking the world’s best university system and destroying the economically important technical colleges in the process).

Link to this piece

This is the alleged number of units of alcohol per day required to minimise the number of deaths from various fatal diseases. It comes from those Oxford epidemiologists who are determined to out-Harvard Harvard in the junk science scare stakes. Their latest effort is a meta-analysis of meta-analyses put through a computer model, which qualifies it as mega-junk.

A meta-analysis is akin to allowing a dozen university failures to pool their exam marks so that one of them can claim a first class honours degree.

It would be interesting to know what the real statisticians in those august institutions think about the nonsense that is promulgated in their name.

The zealots march on.