From the horse's mouth

They are going to kill people and they don't care 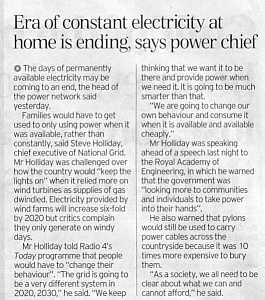 Mr Holiday is clearly of the carbophobic religion. He seems to think that wind power is cheap, when in fact it only exists because of massive subsidies funded by stealth taxes via electricity bills. In the days of a nationalised electricity industry it had a statutory duty to provide power. That was conveniently lost in the privatisation process.

A year ago Number Watch was urging pity the poor grid controller. Obviously he has no need of our pity, as he has no regard for the dire consequences of depriving homes of the electricity on which they rely. Only the day before the Telegraph was celebrating the gift of electricity in a review Children of Light: How Electrification Changed Britain Forever. The greenies have infiltrated every corner of our society and now it seems they have their hands on the levers of our power supply. You will make sacrifices to the religion, whether you like it or not, but now you might well also be the sacrifice.

The cutting in the piece above also appeared a couple of days later on WUWT, which started one of those interminable strings of comments that blemish so many blogs, with a lot of nonsense and only the occasional useful insight. Among the nonsense were several claims that it was a forgery. Mrs Bending Author kindly delved into recycling bin number four and found the original copy. Here below the piece is shown in context on page 14, complete with a remarkably appropriate photograph.

What an extraordinary tale! Here is a story that it is deemed not appropriate for the online edition of the newly green newspaper and is so embarrassing to believers that they yell forgery, fairly typical of the sort of stuff you get in these comment sections. So unlike the home life of our own dear forum!

It is not widely realised that the minister in charge of the UK energy supply is an extreme green who, for example, does not hesitate to manipulate data in such a way that it appears to demonstrate the very opposite of the truth. Not far behind him is his husky-hugging leader Stuntman Dave. If only he would just go away and take his wretched tree with him.

The old firm of Booker and North are engaged in a mild disputation about the mental state of Transport Secretary Philip Hammond. The question is whether he is ignorant, thick, insane or just a liar. He is a member of Stuntman Dave’s cabinet, which places him pretty low in the scale of human achievement. There is no question that he is talking complete balderdash on the subject of wind turbines. The facts on the scale of subsidies that are being wrung out of stressed consumers are publicly available and their deadly intermittency is indisputably shown in published statistics. The greenies, learning from their recruits from among the Marxists who were made homeless by the collapse of the Soviet Union, have mastered the art of infiltration, but it is still shocking that they so easily seized control of the Conservative Party, which is now in serious danger of disintegration. Of course they lie and it is easy to explain why they know they are lying. The question in this case is whether this subject of discussion is blessed with the mental equipment to make a convincing liar.

What we have here is an example of “group reinforcement”. Your bending author, as a teenager, tried out various religions and ended up among the Plymouth Brethren. before giving up religion as a bad job. While apparently being so self-assured about the solidity of their faith, such people harbour a deep-seated insecurity, which they suppress by making sure that they do not come into contact with any contrary arguments. We were advised to avoid socialising with the unbelievers at such events as films and football matches (the latter in Tottenham of all places). The last straw with the Brethren was being told by the bible class teacher that evolution is impossible because mules are infertile. The argument was short and the exit abrupt.

So it is with the greenie sect within Stuntman’s government. When there is a possibility of hearing contrary evidence, they put their hands over their ears and shout “Na na nee na na, can’t hear you”. Then they return to the bosom of their own little group, where they share reinforcing conversations.

This, however, is not just a little local phenomenon. Regular correspondent Dennis Ambler notes the following about our arch-greenie, Chris Huhne

Did you know that Huhne was on the UN High Level Climate Finance Panel, set up by Ban Ki Moon? It also has Nick Stern, George Soros, Ciao Koch-Weser of Deutsche Bank, (advised by Pachauri, Lord John Browne, Lord Oxburgh et al), whose wife is Pachauri's new trustee for Teri Europe. Wheels within wheels, within wheels.

It is a mad world, my masters.

Link to this piece

Apologies for absence (yet again)

Regular readers will be aware that your bending author, owing to a deficient immune system, is subject to frequent infections, some of which have been very debilitating. The latest is a real doozey, leaving one with all the energy and creativity of a blob of jelly on the ocean floor. Grovelling apologies are due to readers, correspondents and those waiting for books. There is, unfortunately, a daunting backlog.

There has been a welter of articles of late about the alleged health dangers of sub-microscopic particles from diesel engines (e.g. here). Naturally this leads to a renewed flowering of the alliance between eco-zealots and authorities seeking to maximise taxation income. This leads to the conjecture that the gestation time between a gleam appearing in the eye of a greenie bureaucrat and the birth of a new tax is about 15 years.

It was of the order of 15 years ago that representative of various disciplines across the university were summoned to a meeting at which it was announced that large sums of Government money were on the table for multidisciplinary research into very small particles in the atmosphere and possible health effects. The response of your bending author was something like “I cannot give a definition of research, but I know it when I see it and this ain’t it. They are clearly out to get particles and are seeking help to manufacture the evidence.” Research funding had been subjected to savage cuts and many groups were in a state of desperation. It looked as though the model for future funding was the Climatic Research Unit at UAE. Early retirement was looking more and more attractive.

It is typical of the way the political and bureaucratic classes operate. For years they have coerced drivers into switching to diesel on the basis of carbophobic beliefs and, now they have them in the trap, reverse the policy.

local authorities, which have now been subjected to a grant freeze, are desperate to increase income to maintain their bloated bureaucratic empires and overpaid executives. The ideal victim is the motorist. Parking restrictions and charges are increasing immoderately and the local authorities seem unconcerned that they are killing off retail businesses in small towns.

More on particles in our next.