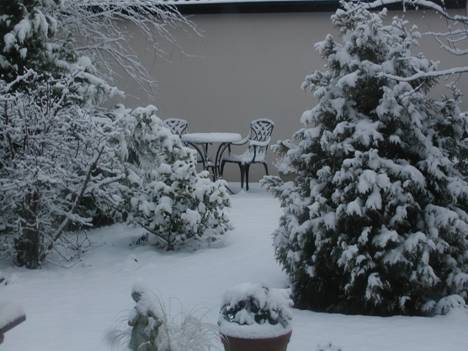 A bending author just looked out

On the feast of Steven.

Deep and crisp and even.

Glance at the thermometer,

Eyes look up to heaven.

Among all the slush and icicles, the atmosphere in ’s great of culture, The Balls Pond Road, was unusually quiescent for Numby Day, which is usually marked by tumultuous activity. Even around the Assembly Rooms above the Takeaway Kebab, there seemed to be a reverential hush among the expectant participants. The reason was, perhaps, the prior announcement by the organising committee that this year’s theme would be “Faith-based Science.”

As seems appropriate, due respect was paid to the New Theology and the opening address was therefore given by The Revd Dr Seymour Trend, who made his debut in Thought for the Day in these pages.

Dr Trend surveyed the modern scene in the light of the epic struggle between believers and deniers.

“The ability to believe is a great gift from heaven that we receive at birth, while denial is a treacherous path that is so easy to slide into by those of weak determination and perverse instincts. All the great scientists of the past were first of all theologians, educated in the great religious foundations that we call universities; but among them were misguided souls, who began to promote unbelief as a creed. Thus a poison was introduced into the veins of that branch of academic discourse that came to be known as science. It is now forgotten, or perhaps suppressed, that theology was known as the “queen of the sciences” and that all other studies were mere adjuncts to the development of theological thought. It is an ancient truism that faith can move mountains, which is not accepted by those who live by the so-called laws of physics.

In this age, when we live immersed in a dangerous miasma called carbon dioxide, belief is more important than ever. Plants were created to remove this scourge from our atmosphere, but such is the magnitude of human assault by the way of so-called economic activity they can no longer cope. As in biblical times, the great prophets of our age are in some circles treated with ridicule and distain. Their forecasts of flood, fire and pestilence are derided, just as they were in the Old Testament, but remember what happened to the sceptics of those days. It is a matter of good fortune that those in control of government and the media have retained the capacity to believe and have combined to ensure that the strident voices of the deniers do not reach the ears of those unqualified to judge. Before the proceedings of this important event begin, I invite you to join me is a short prayer.

We are guilty of sins of commission, omission and emission.
Many are our offences.
We have often failed to adhere to the holy principle of sacrifice.
At times we have recycled without joy in our hearts.
We have covertly turned up the thermostat, putting our personal comfort above the future of humanity and innocent creatures.
We have privately doubted, among all the snow and ice, the truth of the warmest year ever.
We have kept silent when further bouts of cold weather are greeted with “How’s that for global warming then?”
Lead us not into scepticism
But deliver us from carbon.
Forgive us our emissions
As we forgive those who emit against us.

He has shown a capacity to believe that puts others is the shade. His first appearance of many in these pages occurred in December 2000, when he offered the services of his own Foundation for Integrated Medicine to research into such areas as homeopathy, which requires belief in water having the property of memory. His interests are many and as recently as September 2010 he published his beliefs about sceptics, which was a remarkable feat, considering the obvious fact that he had never spoken to one.

One of the titles he inherits will be Defender of the Faith, which he intends to read as Defender of Faiths. It was originally granted by the then Pope to Henry VIII and then rescinded when he did an about turn, but it was restored by Parliament with exactly the opposite meaning to the original. Charles’s capacity for belief extends to all faiths, however contradictory, which is an impressive range.

As a prominent proponent of Global Warming he is a member of IPCC (International Practioners of Conspicuous Consumption) along with such luminaries as Gore and Blair. There are, of course, those who think that he is as dim as an EU light bulb and surrounds himself with many sycophantic courtiers and servants, but he was nominated by the Times Eureka supplement as one of the 100 most influential figures in science, which possibly tells you more about The Times than anything else.

He urges us to listen to our hearts. Perhaps he should campaign for the distribution of free stethoscopes to aid the process.

Dr David Viner, who was our first Numby Laureate, burst upon the scene as the exemplar of the new type of faith-based scientist. He developed a whole new genre of logical argument, which a bending author sought to analyse (see the original Numby citation). He received a further award for Dramatic re-emergence in 2009. His most famous pronouncement, that opponents of the religion should be “ignored and pilloried” caused alarm and confusion. It was a double whammy for old-fashioned adherents of science. First, it advocated two simultaneous actions that were incompossible, which is of no difficulty to those familiar with theological mysteries but opaque to simple scientists. Second, it revealed the new wave of scientific discourse, in which the old gentlemanly resolution of disputes by debate was to be replaced by aggressive vituperation as practised by religious zealots.

The noted infidel, Christopher Booker, had this to say:

We all became familiar with those warmer winters and earlier springs, which the warmists were quick to exploit to promote their message – as when Dr David Viner of the CRU famously predicted to The Independent in 2000 that “within a few years winter snowfall will be a very rare and exciting event”. (Last week, that article from 10 years ago was the most viewed item on The Independent’s website.)

Well, at least he did the scientific thing of making a prediction. Lo and behold, over the last three years, and particularly this one, billions of people all over the world have experienced this very rare and exciting event. Many died.

Chris Huhne is now the man in charge of the ’s energy supply. This appointment was greeted with incredulity by the infidels. Only a year ago you could have got odds of millions to one on it ever happening. He was, after all, a member of a minor political party addicted to opposition posturing. Admittedly he had shown a deft touch with the manipulation of numbers from an unlikely source that enabled him to offer support to the global warming hypothesis. Few, however, anticipated the development that Stuntman Dave would contrive to lose an election that had been handed to him on a plate, which left the Lib Dems in a position of the tail wagging the dog. Dave himself, as an elite member of the political class, was naturally a true believer, which considering the state of the nation, put Chris in one of the two most critical positions of power in the Government. As always, there were those sceptics and cynics who had thought that policies on defence and energy that were once on the edge of insanity had now crossed that boundary. They thought that, among many other vital aspects of modern life, defence of the realm and energy supply were sacrificed merely to provide large gifts of money to rich politicians in poor countries and build hundreds of worse-than-useless windmills that scarred a once beautiful landscape.

In any list of influential faith-based scientists it would be impossible to omit the great prophet of doom himself, James Hanson. He is unmatched for the ferocity of his predictions and the esoteric nature of his workings. His works speak for themselves and it would only diminish them to elaborate.

In a new development, the organising committee introduced the award of corporate Numbies, of which there were two. The first was for the UK Met Office, who kept their cool in the face of overwhelming criticism, indeed levity, around their long term forecasts. There is, of course, no method of traditional science that would allow prediction of kinks in the jet-stream or the position of settlement of such barometric features as blocking highs. They, however, are solid in their faith and have only postponed such activities until such time as the heat is off (or perhaps more accurately on). Of course, the establishment responded appropriately.

The other corporate award went to the , who have re-established the control by their graduates of both Government and Opposition in the UK Parliament. They have been aided by the Maoist hoards of the Labour Party, who by demolishing the grammar schools have removed the threat of leadership being usurped by grammar school oiks. Now things are as they should be and is again ruled by Eton and . It is the degree in PPE that has proven all-powerful, creating a homogeneous political class, whose capacity for belief has raised faith-based science to the forefront of political thought. The power of the political class was amply illustrated by the ease with which the so-called Climate-gate crisis was dealt with. Naturally the sceptics and cynics muttered about “whitewash”, but however much they rant and foam on the internet, our good old establishment media ensure that their ravings are not heard.

Again the mood of the crowd was un usually subdued as they left the Assembly Hall. Evidently they had been given much to think about.

This is the number of years since Dr David Viner announced via the Independent that snowfalls are now just a thing of the past, though to be fair he did hedge his bet.

This is the number of childhood asthma cases claimed by medical zealots to have been caused by passive smoking. It is easy to demonstrate that this is a lie. While it is dwarfed by the equally fatuous worldwide claim by WHO  it is characterised by the same lack of evidence and the complete absence of even one name of a victim. Meanwhile many children are dying of real diseases and asthma continues to increase dramatically, while exposure to tobacco smoke has been decreasing  equally dramatically. The zealots are preventing research into the real cause of this plague.